Getting better; a reunion, a farewell and lost in transit...Cycle 2, Day 8 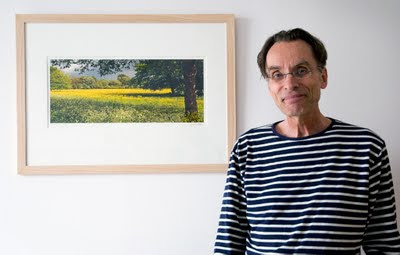 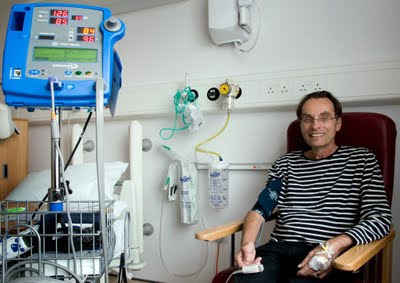 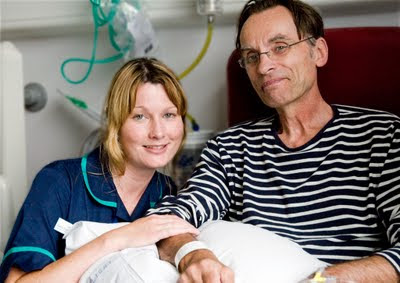 It seems that whatever was pulling Steve down over the last couple of days has relinquished its grip overnight. After the doom and gloom of the last two days and a good, long sleep, Steve was feeling better when he woke up this morning and has continued to improve as the day has gone on. The anti-nausea tablets are working and he is now eating and drinking. Phew.
Our feeling that things were on the up were given a small boost when a parking space close to the Cancer Care Centre became available just as we arrived at the hospital this morning, avoiding a long trek in the rain from a far-flung car park.
An even nicer surprise was waiting for us on the ward. Steve was allocated one of the single rooms and there, on the wall opposite the bed, was one of my two photographs chosen by the Hospital Trust for the Cancer Care Unit art project. We were tickled pink! And yes, it was positive and uplifting, as per the brief. I hope it has the same effect on others staying in the room for treatment. Perhaps we'll be reunited with the other picture on some future hospital visit.
Today we said our farewells to Alana, the drug trial nurse, who is about to start her maternity leave. Have a happy birth day, Alana. We look forward to news of the new arrival. But before then, there were a few hiccups with treatment.
After a long wait, it transpired that Steve's original blood sample had gone missing in transit somewhere between the ward and the lab, so a second sample had to be taken and cleared before treatment could begin. Whilst waiting, Steve had a saline drip to help boost his rehydration which was below par after the problems of the last two days, so a good use of what would otherwise have been a waste of time.
On the bright side, Steve's blood tests came back normal, so no lasting harm from a couple of days of feeling rough. Those results should have signaled the start of chemo. However, the Velcade was not waiting where it should have been - the driver had forgotten to unload it when he made his delivery, and could not be contacted until he returned to base. And then he had to come all the way back again.....
We eventually arrived home after 2 o'clock - a round trip of some four hours for a treatment which literally takes just a few seconds to administer, once the test results come back clear. Perhaps Friday's visit will run a little more smoothly....
Posted by Linda Wride at 19:01