As I write, the Tour de France cycle ride has reached stage 20 - a mountain stage in the French Alps between Megeve and Morzine - around 146 km, with four big climbs (and descents) along the route.  It's the last mountain stage of Le Tour 2016, and a tough one even for professional riders.  Catch it on Channel 4 right now if you are in the UK!

My son Jack cycled this section - known as L'Etape du Tour - three weeks ago, when it was open to non-professional riders, in memory of his father, my husband Steve, who died in February some seven years after being diagnosed with mesothelioma.

I'm delighted and very proud to say that Jack finished the official course along with his two teammates David and Gair, and they even cycled a bit further to make up for the fact that the official route was shortened due to the risk of rockfalls on one mountain section.

I'm also relieved to say that they all came home in one piece and recovered quickly.

And I'm absolutely delighted that Jack's efforts have already raised over £1800 for Mesothelioma UK, a charity which supported us through Steve's cancer.

Jack's Just Giving page is still open for donations.  You can access by clicking THIS LINK!

Well done Jack and all the others who took part.  You are all very wonderful!

And another big thank you to all of you who generously sponsored his ride in Steve's memory.

You are all very wonderful too :)


Now enjoy some photos of the big bike ride !! 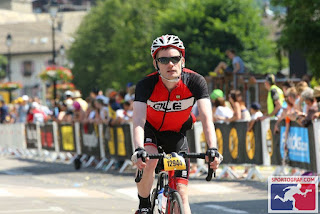 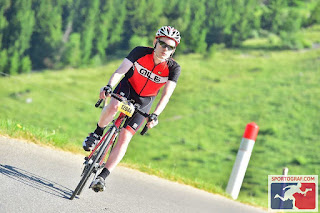 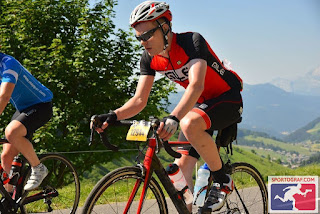 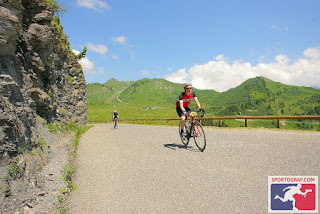 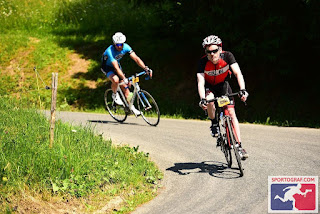 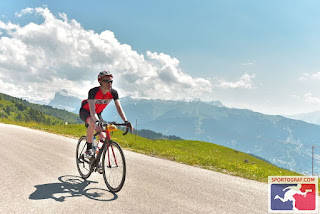 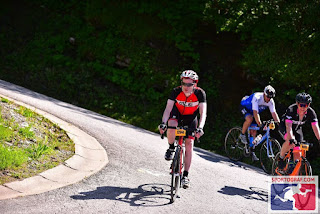 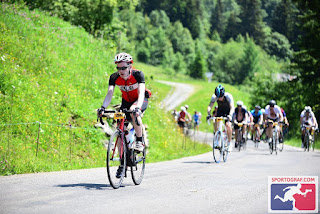 The Coroner's Inquest into Steve's death took place on Wednesday, 6 July.  Such inquests are routine in the UK when someone dies as a result of mesothelioma, because it's usually caused by exposure to asbestos in the course of employment and is therefore classed as an "industrial injury"....something which could have been prevented had the proper safety procedures been in place.

In the past, mesothelioma has mainly affected been people working in industry, the building trades and manufacturing - ship builders, boiler makers, carpenters, electricians, people in the railway and automotive industry and such like.  However, there is an increasing number of cases where exposure has been second hand e.g wives washing husband's contaminated clothes, children hugging parents with dusty clothes, or has arisen in the teaching environment because of the number of educational establishments built during the 50s and 60s when asbestos products were widely used and which have become disturbed over a period of time, exposing teachers, pupils and others in schools.  Google "Asbestos in Schools" if you want to know more about this.

As an architect and artist, Steve's employment history didn't fall neatly into any of the above categories, so there was always a chance that his death would not be classed as an industrial injury when the evidence was placed before the Coroner, even though we had a clear idea about the circumstances of his exposure in the early 1970s.  So I felt that I had to go to the Inquest, even though there was no requirement to attend.

Inquests in the UK are formal legal procedures.  They take place in a courtroom with all the associated legal niceties, such as standing up when the Coroner enters, the reading out of evidence and the recording of the procedures.  I have to say however, that the Coroner, the Coroner's officer, the court officials and the Coroner's Court volunteers were kindness personified.  I couldn't have asked for a more sensitive and supportive approach from those involved.  Nevertheless it was tough.

I have lost count of the number of Hearings, Inquiries and Examinations in public I have run personally in the course of my professional career, so the legal nature of the proceedings didn't bother me at all. Been there. Done that. Knew what to expect.

The Inquest took place some five months after Steve's death, so the process of healing after the grieving has already started.  In recent times, I have been able to talk to people about Steve's death without dissolving into tears.  I thought I could handle it on my own, and declined the offers by two dear friends to come with me on the day.  I was treating the Inquest as a formality - important to ensure the record was correct, but otherwise not a big deal.

I had written sone of the evidence myself and had seen all the evidence submitted by others.  None of its was unexpected; there were no nasty surprises lurking in the words. I was prepared. Or so I thought....

What I was not expecting and was not prepared for, was the tidal wave of emotion which swept over me as I entered the building.  Suddenly, this was real.  It was official.  It was important.  The tears were welling up, even as I was introduced to the Coroner's Court volunteer who was there to support me.  I declined the offer of coffee and by the time we entered the "Family Room" tears were streaming down my face.  It was like the pressure valve had blown and the tap of emotion was running wide open. My reaction surprised me.  There I was.... thinking I could deal with the event in a cool, professional manner as if I was at work, and instead I found myself in tears and the Inquest had not even started.

I began to understand the importance of the volunteer's role.  She was wonderful.  From finding me a box of tissues to reassuring me that my reaction was entirely "normal" in the circumstances. We had a quick peep in the Court Room, so I knew what to expect....not an unfamiliar set up to someone who has been to Council meetings and run planning appeal hearings.  The Court Officer appeared next to explain the procedure, and to tell me that the press were present.  I said I didn't wants to talk to the press (indeed, I could hardly string two words together at that stage and was fearful that I might say something in haste to a reporter that I would later regret...)

When I was ready, we entered the Court and sat down at the front, facing the Bench, waiting for the Coroner to arrive, when we all asked to stand up.

To put it simply, the Coroner has to ask and answer four questions about the death.  Who? When? Where? How?  The answers to the first three questions are usually easy.  Steve was identified by name, date and place of birth and death based on my evidence and that of the paramedic and GP who attended of the morning of his death at home.  However, it was a bit harrowing hearing the evidence read out...I found myself vividly reliving that morning again....

The how question was more complicated - first, there was evidence about his diagnosis and treatment, including all the clinical trials he had taken part in as well,as the chemotherapy, radiotherapy and pleurodesis he had undergone as part of his palliative treatment....then his employment history, including details of the event which we believed led to his exposure to asbestos as a student, when he was part of a group paid cash for a vacation job in 1971 knocking down walls at the School of Architecture where he studied, to create a large open plan studio.  Plus, of course, the building surveys he carried out as an architectural assistant where he may have been exposed to asbestos dust in service ducts and boiler houses and such like.

I have written about all this stuff in the blog over the last seven years, and talked about it endlessly with anyone who asked or would listen, so it wasn't news.  However, hearing someone read it out in a Court of Law took me back in time, and it was upsetting.  The good bits ....about all the traveling we had done, the socialising, the creativity and the experiences we had enjoyed since diagnosis....were not there.  It was just all the bad, challenging, difficult bits of our lives since diagnosis to death...the bits you try to forget.  But it had to be said.

Having gone through the evidence, the Coroner gave her verdict.  Steve's death WAS a result of an "Industrial Injury" and would be recorded as such.  In summing up, she paid tribute to Steve's courage taking part in clinical trials which would help others in future, even though they didn't save his life.  That was nice of her.

I am pleased with the verdict, although acknowledging that his death was avoidable made me angry, upset and frustrated in equal measure.  The chances are he would still be alive today, had it not been for events in the early 1970s.  That hurts.  That's not fair.  That should not have happened.  That was avoidable.  That's why it's taken my a while to write this blog post.

I was too upset when faced again with the stark reality which I've known since 2009 but have somehow managed to overlay with positive experiences and thoughts...which was the way we got through and somehow managed to enjoy almost seven years life together after hearing the worst possible news.

However, I have now spent a couple of days calming down, reflecting, enjoying the garden and taking my frustration out on wall paper stripping as part of the bedroom refurbishment which is my next house project. Now I feel ready to share with you.

This phase of Steve's story is nearly over.  Now the Corner has given her verdict, the information will be passed on to the Registrar of Birth, Deaths and Marriages, who will certify the death.  I can buy the Death Certificate (up to now, I've been using an interim death certificate for probate and related purposes).  That's my next little job, then I file the paperwork away for future generations.

Steve is now an official Industrial Injury statistic as well as a certified death.

This time next week, my son Jack will be cycling a stage of the Tour de France (L'Etape du Tour) in memory of Steve who died in February, and to raise money for Mesothelioma UK - a charity which supports people diagnosed with the cancer that killed Steve, and their loved ones.

Many thanks to all of you who have sponsored him so far!  If you have been meaning to make a donation but haven't got round to it, there's still time....Please click on this link to his JustGiving page

If you want to know what he's let himself in for, then please read on....

It takes a lot of courage, bravery, grit and determination (or stupidity, according to Jack!) to do this feat especially if - like him - you are not a professional cyclist.

The distance is 146.5 kilometres; the steepest gradient is 8.5% and there are no less than four mountains to climb (and descend...the really scary bit)

Even the guys who do it for a living find it hard going!  You can watch the professionals ride this stage of the Tour on Saturday 23 July.

Jack will be doing his cycle ride over exactly the same course on Sunday 10 July, along with team mates David Gillet and Gair McAdie.

Good luck Jack and the rest of the team!!


The pattern of recent Tours is followed with a major mountain stage in the Alps the day before the finish. This has a twist, however, as the finish is at the foot of one of the nastiest descents the Tour uses, the 14km of twists and turns off the Col de Joux-Plane. There are three earlier climbs before the final shootout, which will favour a sublime descender such as Vincenzo Nibali or Bardet rather than Froome. 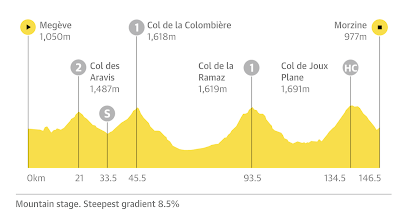 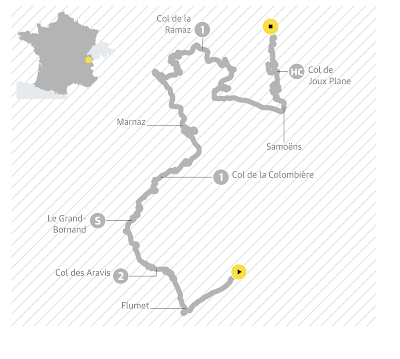