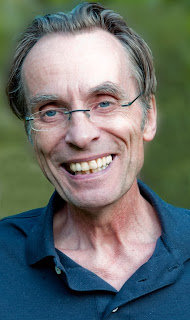 I'm not sure exactly when it started - having flu-type symptoms (cough, breathlessness, loss of appetite) did not seem significant at the time - apart from the fact that it put a bit of a damper on our anniversary trip to Italy, but not enough to stop Steve climbing to the top of the Duomo in Florence!
The doctor who saw him on his return home in May put it down to a "virus" and told him to come back in a fortnight if he still felt unwell.
On his second visit, a different doctor was concerned enough to send him for a chest X-ray. When he was then referred on to the assessment centre, we realized it was something more than flu. A CT scan revealed fluid on the lung (pleural effusion). He was told he would need a chest drain, and at the same as inserting the tube, they would use a small camera to look inside the pleural cavity (thoracoscopy), take a biopsy for testing, then squirt a sterile talc into the gap to help the pleura stick back together (pleurodesis).
To avoid clashing with various family and social events and work commitments, Steve asked for these procedures to be postponed until after we returned from our main holiday, in early July. When the appointment was brought forward instead, we suspected that he might have something more serious than we had imagined. Didn't feel in the mood for socializing so missed Andy's leaving drinks and Sue's 60th birthday party. We'll catch up with you guys at some point, promise.
Steve was in hospital for four days last week. The procedures were straightforward, and went off without a hitch. The first night he was in considerable pain and discomfort from the chest drain - not helped by long wait for a porter, followed by a marathon trip in a wheelchair to transfer him to the ward via X-Ray, only to find that his bed had been taken and he had to sit in the day room, feeling faint and sick until another bed became available. Things improved after that, thanks to great staff (thank you Angel and the rest) and morphine (although the side effects were less comfortable - if I mention senna you'll get the picture).
It was a relief to have him home on Thursday evening (thanks to Sally for being a sensitive chauffeur) - the house had seemed very empty without him, likewise the bed. I kept waking up wondering where he was...
Steve returned to hospital on Tuesday to have the stitches in his side removed and hear the diagnosis. By a cruel twist of fate, I had to be in London for work-related reasons that same day - too short notice to postpone and not possible to delegate - so he heard the news that he had mesothelioma whilst on his own, with no one there to support him. I feel SO bad and guilty not to have been with him. I heard from Steve on the train journey home. The text just said "Talk about it later", so I guessed it wasn't good news and phoned at once. Although I was expecting bad news, when he said it was mesothelioma I could hardly believe my ears. I still can't.
Unlike his dad, who died of mesothelioma coming up to 20 years ago, Steve had never worked in ship-building, or boiler-making like his granddad - heavy industries where so many unsuspecting people were exposed to large amounts of asbestos which has left the mesothelioma time bomb ticking. His dad had left Charlie Hill's in Bristol before he was born, so he couldn't have breathed in fibres from work clothes. However, Steve's work in various architects' offices in the late 60s early 70s involved visiting buildings and sites where asbestos was being used, so that might be the source.
Anyway, that's how it all began. In the space of a few short weeks our lives have been turned upside down and inside out. If you want to know how that feels, I'll try to put it into words sometime soon.
Posted by Linda Wride at 18:28