A roller coaster of a week in a small world

Having spent all of February getting used to a new routine based around twice weekly hospital visits and regulated eating and fasting times, it came as a bit of a shock to the system to be told last Monday that Steve should stop taking the trial drugs vandetanib and selumetanib because of the effect they were having on his heart rhythm.  Not the news we were expecting.....

With hindsight, in some ways it was a blessing in disguise.  In other ways, it has made us feel more vulnerable.

Perhaps naively, our expectations were that Steve would see an improvement as soon as he stopped taking the medication. The reality was that in the following days he felt worse (no energy, no appetite, skin condition deteriorating further).  The low point was Wednesday evening, when he ate hardly a morsel; the skin on his cheeks was sore and weeping; he had no energy and his mind was dull.  By then we were thankful that he had stopped taking the trial drugs...not liking to think what it would have been like, had he continued.

As the prescribed creams seemed to be having little affect on his skin, Steve tried something new that night - an antiseptic healing cream called Sudocrem, which we used for nappy rash, back in the days....By Thursday morning, his skin was already showing signs of improvement and that has continued - a great psychological and physical lift.  By Thursday evening, his appetite had improved and the following day, he felt well enough to venture out for a short while.

The blue skies and milder weather over this weekend have cheered us up.  Although he had to smother his exposed skin with Factor 50 sunscreen, Steve felt confident enough yesterday to go out for a pub lunch, drop into a "garden room" showroom and have tea at a National Trust house. The best day out we've had together for ages!  Today, our spirits were lifted by the arrival of another birthday present for Steve and England's win in the Six Nations rugby tournament!

However, tomorrow's hospital visit is beginning to loom large. That's when Steve will have all the usual tests and observations, including the ECG which will tell us whether his heart rhythm has returned to "normal" after a week's break from treatment.  Only then will we know whether he can continue to take part drug trial at the current dose, on a reduced dose, or not at all.

These thoughts have been haunting us all week.  They highlight what a difficult position Steve is in; somewhere between the proverbial rock and a hard place....
Not surprisingly, there have been times when we both felt a bit vulnerable over this last week. But we're trying not to worry too much at this stage.  There's no point speculating about the answers to these questions; we will find out soon enough.  However, we have needed to give some thought as to how Steve would feel in any of these scenarios, so that we're not paralysed like a couple of scared rabbits caught in the car headlights when we find out what's what tomorrow.

That's why it's been a bit of a roller coaster this week, but what's the reference to the "small world" in the title of today's post?

When I started the blog, it was primarily a way of keeping family and friends up-to-date with Steve's condition.  I didn't honestly think it would be going on as long as it has (but I am delighted to still be writing it!) or read as widely. One of the people who has been following the blog is Margaret, a Canadian whose husband has mesothelioma.  She contacted me recently to let me know she would be visiting Europe, including a few days in London, and wondered whether we might meet up.

We had lunch and then went on to spend the afternoon together, discovering the parallels between our respective journeys and sharing information about the different approaches to treating mesothelioma in our respective countries. More of that in a future blog! It was great talking to someone who understood exactly what I was talking about and feeling - a very special afternoon. 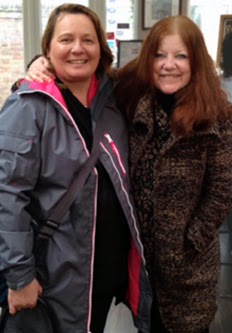 Margaret - I'm so pleased you decided to get in touch and made the effort to fit a visit to Oxford into your busy schedule!  Many thanks again for the presents and the information.  We will keep in touch, I am sure!

And on that upbeat note I will finish today's post, so we can prepare ourselves for tomorrow, the start of a new week .....and who knows what that will bring?