Like most people, we mark the passage of time by special events - family things like birthdays, anniversaries and holidays, as well as regular seasonal celebrations and major pubic occasions.  However, since Steve was diagnosed with mesothelioma in 2009, we have had to to face up to the horrible reality that he might not be here in twelve months to celebrate the next time a special occasion comes around.

As most people in our situation will tell you, this knowledge focusses the mind wonderfully and you really do try to make the most of these special times!

Yesterday, Mayday, was one such occasion - our wedding anniversary. We set off for London under blue skies and it stayed that way all day, just like the day we were married. 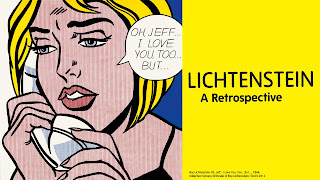 followed by lunch in the Members Room watching the world enjoy the sunshine in the riverside gardens and Thames embankment. 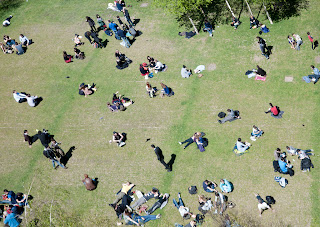 With a few hours to spare before our next appointment, we went down to Bankside Pier, hopped on a river bus and headed off the Greenwich 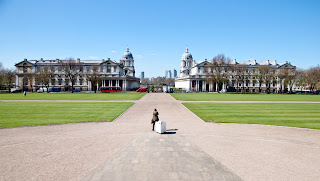 where we wandered around The Queens House, with its wonderful Tulip Staircase and Great Hall. 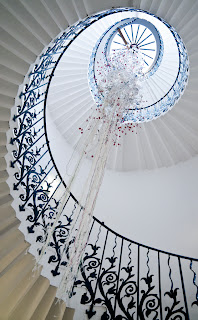 Then on to the National Maritime Museum next door where we enjoyed tea and cakes on the cafe's outdoor terrace while watching the Fowlers Troop and Deptford Jack in the Green pass by with drummers and people dressed as the Green Man and the Bush to welcome the arrival of spring. Apparently they do it every May Day through the streets of South London, from pub to pub - this year via Greenwich Park where we were sitting.  How lucky is that?

We visited the museum many years ago when son Jack was a child, but when we had a quick look inside, we were amazed by the changes since then. One to return to, I think! Likewise, the Cutty Sark, Britain's last surviving tea clipper, now fully restored after the fire that damaged it so badly in 2007 and resplendent in its new dry dock home that allows visitors to walk around the ship below "water level". 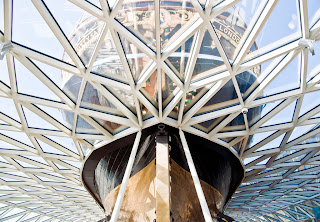 Back at Greenwich pier, we re-boarded the Thames Clipper but this time only as far as London Bridge, close by our next port of call - the Shard! I was given two tickets for the View from the Shard as a Christmas present by Steve and thought it would be a lovely way to mark our anniversary, on top of the highest building in Western Europe, looking over the city where I was born and grew up.

Many years ago, when dithering about whether to sit on the top or bottom deck of a London bus, a friend winked and said "Up is a nice place to be".  I think he had something else in mind at the time, but he was right...I have found that being in a high place with distant views helps you put things in perspective and forget your immediate worries and concerns.  And the views from the Shard are breathtaking, especially on a fine day like yesterday. 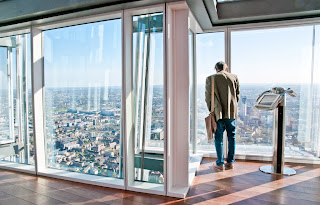 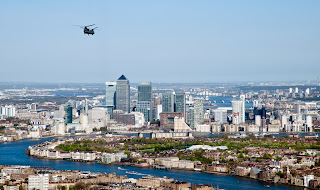 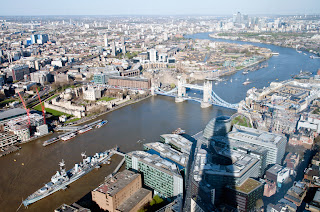 We could have spent hours up there, scanning the distant horizon, spotting landmarks, watching activity on the streets, the river and the maze of railway lines below. 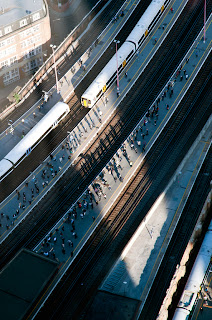 As it was, after about an hour our legs were aching, we needed to sit down (there are no seats in the viewing galleries, deliberately we were told, or people would never leave!) We also needed something to eat, so we zoomed back down to ground level and headed for the 17th century George Inn nearby, London's only surviving galleried coaching inn which is owned by the National Trust.

The yard was heaving with people when we arrived, but we found a table for two in the Gallery Bar upstairs, where we were happy to stop for a drink or two and some excellent food to recharge the batteries. 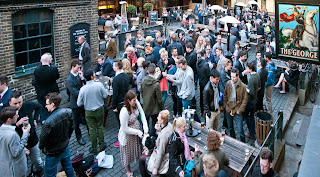 Luckily for us, the George is not only close to the Shard, it's also within stumbling distance of London Bridge station where we caught the tube back to Paddington and arrived just as the Oxford train was boarding.

I confess, it was a bit of an effort to get out of our seats at the end of the journey.  Joints had seized up and sore feet protested at having to bear weight again, but we made it home in time for a nightcap before falling into bed at the end of a very happy anniversary!

May 1st marks the start of another very intense period of activity for us, partly to make the most of this time in the run up to Steve's next hospital assessment in early June and partly to take our minds off it.

Oxford Artweeks is just about to launch.  Our work has already been printed and delivered to the Jam Factory gallery, where it will go on show as part of the Artweeks Open exhibition. 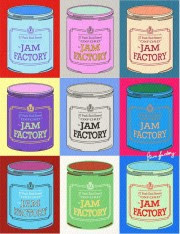 We're off the the private view of the local art group tomorrow evening.  Family visits and, if we're lucky, a hot air balloon trip this weekend.  Keep your fingers crossed that the fine weather continues!

Next week, there's a couple of days tying up business loose ends and a meeting with the accountant so we can file Wride and Company's first return to Companies House; an all day photo shoot at Stow Gypsy Horse Fair; a day out at Grand Designs Live at Excel, London and friends arriving on the Friday for a weekend visit.  Work commitments the week after that and then....Oh dear, I'm getting a bit ahead of myself. You will have to come back another time to find out what happens next...


Sending much love and positive thoughts to you all x