It's less than a week until we have our photographs assessed at the Royal Photographic Society (RPS) HQ in Bath to find whether the Visual Art Panel thinks we're good enough to be made up to Associates.  Easier said than done, as we know from experience.  As with all things where subjectivity plays a large part in the outcome, it's a bit of a lottery.


We've been selecting, printing, in some cases re-printing, and mounting photographs for the last few days, but will probably be tinkering about with the panels right up to the last minute. It's feels just like being a student again, getting ready for a project "crit" - quite nerve racking trying to second guess how someone else will react to the fruits of our labours.


However, the photography spirit has been lifted by two bits of good news.  We've both had work accepted for a exhibition in a local gallery on the theme Coast which opens on 1 July and runs right through until the middle of August. 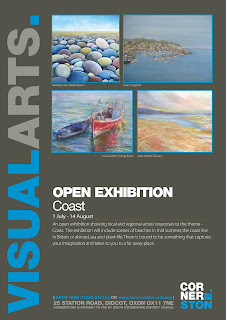 One of the images which will be shown in the Coast exhibition is currently on tour in the RPS Members Exhibition and was used the local press under to promote the exhibition opening in Watford under the banner headline Prestigious_exhibition_comes_to_Watford  (click to read the article) What a nice surprise - especially as the Kite Fliers forms part of my RPS panel which is going to be assessed in Bath next week!
All this photography stuff is a distraction from the BIG event of next week - Steve's hospital assessment on 16 June, exactly two years after he was diagnosed with mesothelioma. As always, it's a worrying time not knowing what they will find when they look inside his body. He's still feeling good.  We're hoping that the coughing episodes he's had on and off since the last assessment in March have been related to hay fever, rather than a sign of Leo the meso stirring.  Keep your fingers crossed.