Although we caught up with many friends and family members at my significant birthday party last month, sadly none of my cousins were able to make it and there was little opportunity to say much to those of you who were there.


However, an invitation to lunch in Long Melford, Suffolk, last Sunday was a great opportunity to meet up with two of my cousins, Maureen and Rita, and their families to celebrate the "almost 40th birthday" of Maureen's youngest son James. Many thanks for an excellent afternoon, Maureen and John! We hope you didn't have too much of a hangover on your birthday the next day, James...


The lunch invitation was also a catalyst to meet up with other friends living in that part of the world and an unmissable opportunity to explore the Suffolk Heritage Coast - so that's what we did!


Our trip began on Saturday in Bury St Edmund's, where we stayed over with Keith and Glynis.  A welcome opportunity to catch up on their news in a relaxed fashion, see all the hard work they had put into their lovely listed building (at long last) and enjoy a walk around Bury on Sunday morning before heading off to Long Melford, just down the road. Great to see you both and many thanks for the hospitality!


It was almost dark on Sunday evening by the time we reached our holiday house, located in a small village not far from the coast, so no time to get out and about that night. 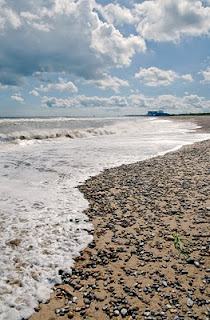 However, we set off on Monday morning to explore the area around Dunwhich Heath (National Trust), and walk along the coastal path dominated by views the dome of Sizewell Power Station in the distance, before diving off - not literally, I hasten to add- into Minsmere (RSPB reserve) on our way back to the NT cafe for food. 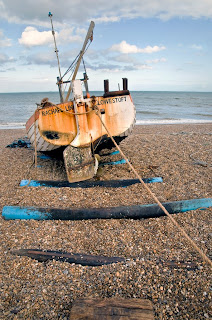 On to Aldeburgh that afternoon for another walk along the beach, taking photos of fishing boats and bits of rope as usual! 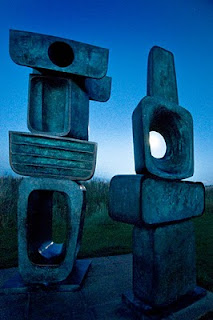 We finished our Monday outing at Snape Maltings where we had a meal at the concert hall before going to a bewitching performance of a piece by Brian Eno inspired by the Apollo space mission, which was performed against a backdrop of film showing the first moon landing. At the end of the concert, we emerged into a clear night with a full moon rising over the reed beds, framed by sculpture. Pure magic!


Tuesday saw us heading south along the coast to the village of Orford, arriving just in time to buy tickets for the one o'clock ferry to take us over the river to Orford Ness, Europe's largest shingle spit.  We hadn't realized that the ferry is only licensed to carry 12 passengers at a time and does a limited number of trips up until 5 o'clock - the last tickets for the day had sold out less than an hour after we had arrived at 11 am!


Orford Ness is an amazing place - desolate beauty on a huge scale, splattered here and there with a splendid light house, derelict buildings, structures and rusting detritus associated its military history.


The wind was almost strong enough to sweep us off our feet as we walked along the shingle spit between the lighthouse and the lookout tower.  We could see the weather coming from a long way off in the huge sky, but were lucky enough to avoid most of the showers - and were fortunate not to get soaked on the return ferry trip, by which time the water had become very choppy!


Tea at Snape Maltings to warm us up, then home via Aldeburgh beach again, this time stopping off to see Maggi Hambing's sculpture - Tribute.  I don't know what all the controversy was about - I liked it very much, as did the kids using it as a slide and climbing frame!


Wednesday, we headed north along the coast to Southwold - a traditional seaside resort with a wonderful sandy beach and colourful beach huts, which is also home to Adnam's Brewery and an unusual collection of "amusements" on the pier - Tim Hunkin’s fascinating and entertaining hand-built machines.  Plenty to keep us occupied all day! 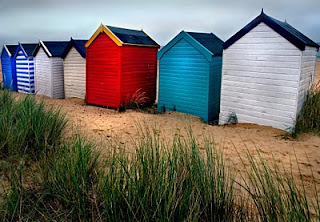 On Thursday morning, we packed our bags, said goodbye to our holiday house and headed north to Norwich where we stayed the night with Prue and David, having spent the afternoon enjoying ourselves at the Sainsbury Centre for the Visual Arts, at the University of East Anglia.

It was also a lovely opportunity to talk over a meal at the Unthank Arms that night and catch up on all the news we didn't have time to discuss about at the party.  Thanks Prue and David for being great hosts!

And so it was that we were on the road again on Friday morning, traveling home via the scenic routes to avoid the Bank Holiday motorway traffic jams. We even managed to pick up a replacement toaster, which had sold out locally and on line, when stopping briefly at Milton Keynes on the return trip.
What a week!  We really enjoyed ourselves on our mini-break to East Anglia and now look forward to sorting out the hundreds of photos we took while away.  There was good news awaiting us at home.  Three of my images have been selected for the autumn issue (No 7) of Fotoblur magazine - I'm delighted!  Plus, the Nuffield Orthopaedic Centre has asked to keep three of our pictures (two of Steve's and one of mine) on long term loan as they like them so much.  So if you ever find yourself in the NOC, look out for the colourful botanical canvases in the foyer!
More importantly, a mesothelioma patient in Devon is going to have his latest treatment in Frankfurt (chemoembolization with Prof Vogl) funded by the local PCT, given the good results achieved with treatments so far...that is SO encouraging as the date of Steve's next assessment comes ever closer.
Posted by Linda Wride at 14:11