On 1 May 1972 we were married at Wheatley Register Office, near Oxford and, being poor students, we celebrated with home-brewed beer, a home-made cake, other home-made edibles and a disco organized by friends.

1 May 2010 found us on the beach at Rhossili, on the Gower peninsula in Wales, watching the surfers, taking photographs and basking in the sun as the mist rolled back from the cliffs. 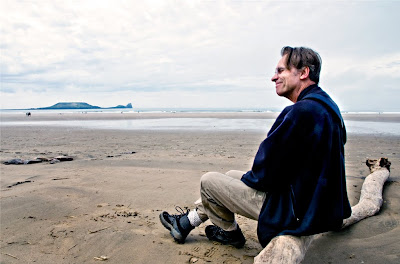 Round the coast to The Mumbles in the afternoon for a walk along the prom, tea and cake al fresco, then on to Swansea for a wander round the marina and museums before heading back to our B&B for a bottle of prosecco and nibbles.  Photos will be posted soon!
When Steve was diagnosed with mesothelioma last June, I wondered if we would be celebrating our anniversary this year - but here we are, 38 years on and still going strong.
Here's to the next one, and the one after - it would be good to make it to 40 years together!
Back to Oxford today in time for lunch with Jean, one of our neighbours.  Happy birthday for yesterday Jean and thank you again for a very enjoyable meal!
Waiting for us at home was a letter from the solicitor enclosing the medical specialist's report for the court, much of which goes over familiar territory. Dr Rudd notes that expansion of the right side of Steve's chest is somewhat diminished as were breath sounds over the right lung.
However, he assesses Steve's general condition as good, with no abnormalities noted in the cardio-vascular system, abdomen or nervous system.
The report points out that estimating life expectancy is difficult because the course of Steve's illness has probably been modified by the chemo he had last year, and the very limited bulk of the disease at present, as well as uncertainty about future treatment. However, on the evidence currently available, he estimates Steve's life expectancy at 2 years, but with a significant chance that he may live more than three years, and a significant chance that he may die within one year.  Now that's what I call hedging your bets.
Although his estimate underline's Steve's mortality, we have taken some heart from this medical opinion - it makes me feel more confident about the possibility of a ruby wedding celebration in 2012.  It also brings home to us once again the importance of making the most of these good times.


If you want to find out what else we get up to by way of enjoying ourselves, you'll have to watch this space :-)) !
Posted by Linda Wride at 20:25